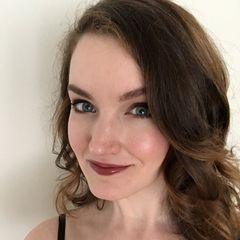 Crystal Schwanke
Socially Fragrant at Scent Chasers
Crystal enjoys investing in expensive perfumes and colgones, so she's usually wearing fragrances in social settings to make a statement. While other people are impressed with fancy jewelry, she can always tell a cheap perfume from an expensive one!

I usually shy away from anything labeled cologne because they smell out of place on me. Still, I tried Kenneth Cole Black cologne on myself and even wore it out in public. Usually, I’d scrub a “manly” scent right off of my arm if I happened to try it. (Sometimes, my husband’s fragrances tempt me because they smell so lovely, especially if they have lavender and/or basil notes.) My husband tried it, too, of course.

I’ve been obsessing over perfumes at all price points and from all fragrance families for about 20 years. I’m the one who chooses my husband’s colognes, for the most part (he doesn’t care about the specifics that much as long as he smells good). Somehow, we’d never tried Kenneth Cole Black until recently.

It won’t replace my favorite cologne on my husband, but it’s nice enough. Well, in my opinion. He was utterly underwhelmed from the first spray because it smelled too fresh and clean, and his opinion never wavered.

I smelled tangerine and spices when he sprayed it on, and the upstairs smelled wonderful for about five minutes. I was sold. Then the projection died down, the notes got fuzzy, and neither of us was that impressed. It was nice, but not remarkable.

It’s “okay,” and it has its place. Younger guys who are just getting into cologne and want something upbeat and fresh might like it. My husband’s in his 40s and tends to go for woody fragrances more than fresh ones, and this definitely wasn’t a good match for him.

I don’t gravitate toward fresh or unisex fragrances, and it smelled better on me than I thought it would, but I still wouldn’t make a habit of reaching for it.

Suppose you’re looking for something sexy with a lot of depth, and you’ve been comparing and enjoying colognes for years. In that case, it might strike you as boring or generic. If you’re young and new to cologne, this could be the fresh, safe buy you’re looking for.

On me: Fresh, clean, like using a green body wash (you know how colors have smells?) under a waterfall. Maybe a little bit of citrus was there, too. On my husband: Tangerines and warmth (to my nose) and aftershave (he mentioned Old Spice by name) to his nose. He said he meant “fresh and clean” in general when he said aftershave.

More obvious notes were coming out to play on his skin than mine. My skin is a lot drier than his, and he tends to spray any fragrance three to four times, while I almost always stick with one or two unless I know it’s weak, so that could have something to do with it, too.

Now that you know what my husband and I smelled when we sprayed it, let’s go to Basenotes to see which notes are listed:

What I (We) Thought

My first impression was positive both times (sprayed on myself and, later, my husband). The citrus and green notes were pronounced–especially the citrus–and it was like smelling real tangerines (well, mandarins). I enjoyed that introduction.

Then the hints of spice started to show up on my husband, and I liked it even more. On me, it just settled into a pleasant, clean, almost-unisex fragrance where nothing, in particular, stood out. He was less impressed, and he’s less picky than I am. He usually says he goes nose-blind to fragrances so quickly; he’s just wearing them for my benefit. He tried this one twice and didn’t want to wear it anymore.

Kenneth Cole Black got less exciting on both of us as the days went on, which was disappointing. With that first spritz on my arm, I thought if my husband didn’t like it, I’d take it and wear it sometimes on the odd day I wanted something fresh and citrusy. Nah. It’s not a scrubber, but I won’t seek it out.

I Should’ve Liked It More Than I Did

The list of notes above tells me that I should’ve liked it a lot more than I did. I enjoyed the fresh top notes, but other than the mandarin (which I thought was tangerine), none of those stood out, and two of my favorite scents are basil and ginger.

The incense (another favorite), nutmeg, and cedar leaf flirted with my nose. Still, they were barely detectable as more than generic “warmth” on my husband’s skin. I didn’t notice any of that on myself.

By the time the base notes came into play, Kenneth Cole Black had just dried down to something generic and mildly upbeat. It wasn’t bad, but it wasn’t as sexy as the notes make it sound. It was just… “youthful cologne smell.” That has its place, but I didn’t get the suede, violet leaf (a fresher green scent than a sweet, powdery violet flower note), musk, or ambergris. Neither did my husband.

This had a low-to-medium projection. Compared to most of the fragrances my husband and I wear, this one was more subdued once it settled down, even after he sprayed three to four times. After a couple of hours, I had to search for the scent on my arm (but I had only sprayed it once).

It lasted all day on both of us, but it was faint on my skin. It had almost disappeared from my arm by the night’s end, but it was still going strong on his t-shirt at bedtime. Again, I had to get close to smell it because the projection wasn’t high to begin with, but it was still there.

I’d call this one safe for school or work, and it’ll last through school and work if you’re a student who goes to work after classes (or takes evening classes after work).

The short, cylindrical, glossy black bottle is simple enough. I like it, but it’s nothing special. It gets the point across. It’d look better and probably be less slippery in the hand if it were matte black.

I don’t think there’s a considerable risk of it falling out of your hand with regular use (it’s actually easy to hold and spray). Still, matte surfaces tend to be easier to grip, in my experience. However, they can also be harder to keep looking clean, so the glossiness could be a plus in that regard.

The nozzle worked as expected. No surprises there. It didn’t spray too much or too little. It sprayed forward onto my skin rather than trickling down the front of the bottle and onto my hand (I hate when fragrances do that).

What I Love About Kenneth Cole Black

What Could Be Improved

Where to Buy It

I found my bottle at Fragrancenet.com, but you can get it at:

Other Colognes to Try

If you think you’d like Kenneth Cole Black, but it might not have enough “oomph” for you, try Black Bold. The notes are almost identical, but the composition is slightly different. Some notes stand out more than others (like lotus flower), but overall, it seems to be a richer, more intense version of Black.

Clinique Happy was the first cologne to pop into my head once I smelled Kenneth Cole Black and thought about what it was trying to achieve. Happy (for men or women) is the epitome of a citrus fragrance. Along with the mandarin, green notes, and cedar it shares with Black, Happy has lime, kalamanzi fruit (also sour citrus), Mediterranean cypress, and sweet, smoky guaiac wood.

There are a lot of notes in Lacoste L’Homme that overlap with the notes in Black. They both have mandarin, ginger, and cedar for that fresh, zesty, woody vibe.

However, Lacoste L’Homme has rhubarb (tart), quince (fresh, like an apple), vanilla for sweetness and warmth, pepper, jasmine, almond, and akigalawood (spicy and floral). This one might be a better choice if you like your fresh notes grounded in warmth and woods.

CK One takes the almost-unisex quality of Black and runs with it. It was released as a unisex fragrance almost a decade before Kenneth Cole Black hit the scene.

Paired with the citrus, green notes, nutmeg, musk, and cedar notes that Black also has are more florals (rose, jasmine, freesia, violet), other fruits (pineapple and papaya), cardamom, green tea, oakmoss, and sandalwood. It’s like Black, but more well-rounded and meant for men and women to wear.

Answer: It’s fresh, clean, and a little spicy. Mostly, I smelled citrus notes before it dried down to a more generic men’s shower gel or aftershave type of scent.

Question: What are the scents in Kenneth Cole Black?

Answer: The notes are watermint, mandarin, ginger, basil leaf, incense, cedar leaf, nutmeg, lotus flower, black suede, ambergris, violet leaf, and musk, but few of them stood out to me. It was primarily mandarin, with hints of watermint, followed by hints of woods and spices.

Question: Is Black by Kenneth Cole for a man or woman?

Answer: This review was for the men’s cologne, even though I tried it on myself, too. There is a perfume version for women, as well. There’s some overlapping of notes between the two versions. Still, the women’s version has more florals, powdery notes, and features sandalwood instead of cedar wood.

Question: Is Kenneth Cole Black the same as Black Bold?

Answer: No, but based on the notes, they’re similar. Black Bold seems like an amplified, intense version of Black (as you’d expect by the name), but it’s not the same fragrance. Based on my experience with Black and what I’ve read after poring over forums and blog posts about Bold, I’d choose Bold if I had to purchase one without smelling either one of them first.

Kenneth Cole Black Cologne Review: Should You Buy It?

I’m not going to say yes, but I don’t want to say no, either. Does Kenneth Cole Black stand out? No. Is there depth there or a shifting through notes over time that take you on an adventure from the time you spray it until it dries down? Also no. The question is, do you care?

If you’re new to cologne, like citrus and fresh notes, and simply want to smell nice rather than get a whole experience out of it, Black is perfectly acceptable. If you’re looking for something that will last all day without taking over a room, it’s also a good choice, especially when you’re on a budget.

To my husband and me, this one isn’t a must-buy. It’s a little generic once those top notes disappear. It’s good if you’re looking for something to wear to school or work without offending anyone, a fragrance that’ll hang around through the evening hours until you go to bed, try it out.

We want to test every scent there is on the market! We know how tricky it is to find your classic smell, the one cologne or perfume that you can call your perfect match! Our team at Scent Chasers covers reviews of the hottest scents and dupes to save you some money